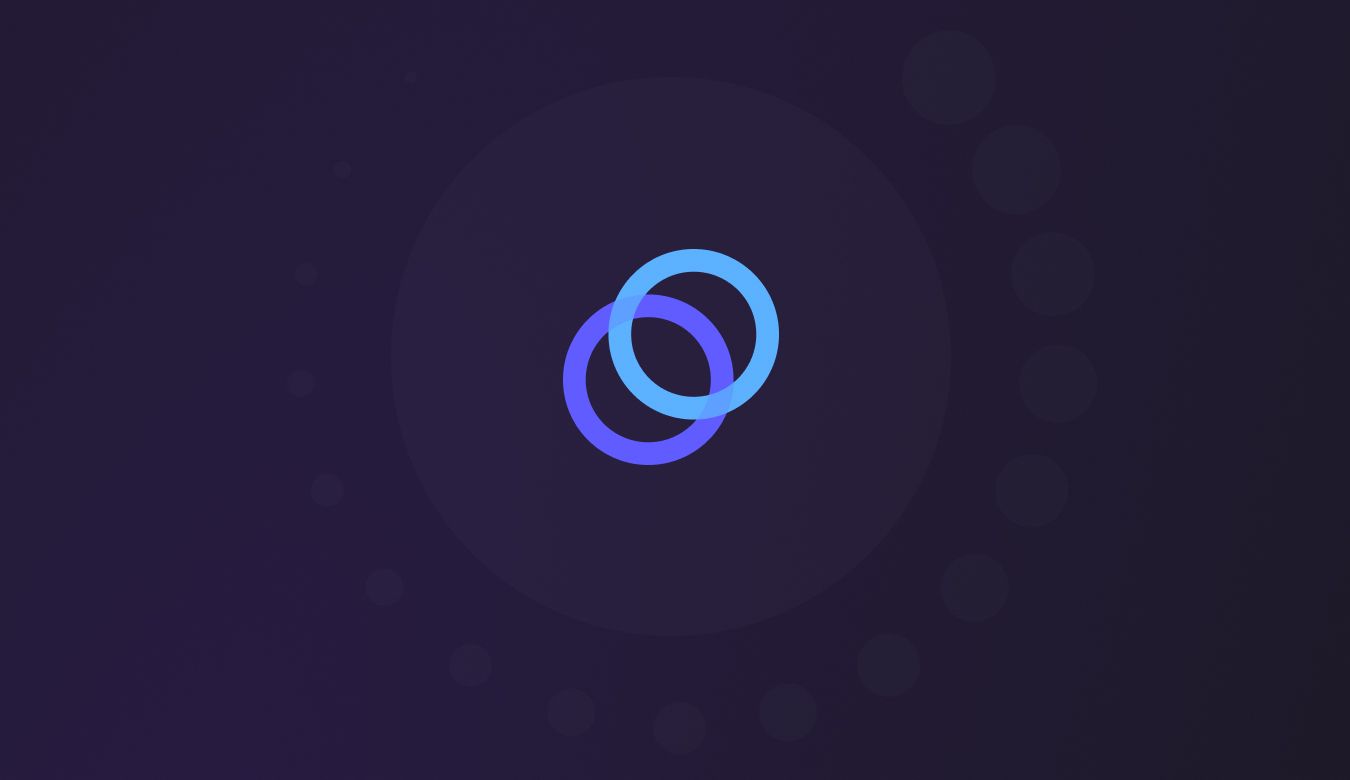 The report below sheds light on the Celo ecosystem as well as on chain performance using on-chain parameters.

Celo is a fully EVM Tier 1 compliant blockchain that was launched in 2020 as a distributed payment platform for digital currencies that was primarily designed for users who prefer mobile devices. Celo's main goal is to create a financial system that is open to all, with the ability to facilitate payments between any phone number in the world. This is achieved by using an ultralight client whose job is to connect the device to a full node, thus allowing any person to connect to the Celo network with minimal data requirements.

Celo is strongly focused on the idea of ​​Regenerative Finance (ReFi), which is a concept of a forward-looking and scalable financial architecture, the fundamental assumption of which is to maintain a positive impact on the environment, as well as to create favorable conditions for the development of its community. This network is currently a leader in the Climate Collective initiative, which in fact seeks to develop partnerships between many projects and web3 organizations whose common goal is to reverse climate change through intensive ecological protection efforts. Celo is stepping up a series of activities to strengthen the efforts of the ReFi ideology and provide the necessary infrastructure, whose primary mission is to deliver a global payment system that will ensure a sustainable future for people and the environment.

- From the very beginning of the second quarter, the Celo community launched the #RefiSummer campaign. This activity was aimed at examining what a theoretically sustainable economic system could look like. This operation was carried out using several decentralized applications (dApps) that were previously built on the Celo blockchain.

- Uniswap v3 was one of the dApps that could potentially be deployed on the Celo network. The beginning of this process is the Moss Carbon Credit (MCO2) token pool, which provides liquidity to the voluntary carbon market, and then initiates efforts for tokenized carbon credits.

- Another idea for building a sustainable world using the Celo blockchain is the MCO2 Token. Its purpose is to represent the REDD+  forest carbon credit that has been previously tokenized in the blockchain and comes mainly from projects that develop dedicated technology solutions to engage in efforts to regenerate the global environment.

- The Celo Foundation would help seed initial liquidity so that users from other EVM-compatible chains can bridge over to use MCO2 and other future ReFi assets.

- The idea of ​​creating such a pool of tokens that would have sufficiently deep liquidity would allow scaling the carbon market and facilitate transparency between institutions and individuals.

- Another dApp introduced was EthicHub. It is a highly innovative protocol supporting agricultural projects and farmers without a bank account. Many of these people are the backbone of the agricultural ecosystem and yet have no access to credit due to lack of collateral. In this particular case, the community has the option of supporting these farmers by lending them capital or providing collateral. All of these features are available through EthicHub's crowd-collateral smart contract platform.

- Apart from the implementation of new projects, the Celo Foundation has recently launched the Celo University Guild. It is a platform that contains a vast treasury of information for both students and teachers, which aims to connect the entire community with each other, regardless of the technical experience of its individual members, to learn and develop together.

- The simultaneous focus on both development and community building is fueling the success of this still young project.

- Celo Camp is a joint project of the Celo Foundation and Upright. Celo Camp, thanks to its knowledge and financial potential, aims to help novice entrepreneurs in the blockchain sector connect and develop new ideas, most of which concern broadly understood social and environmental problems.

- Plastiks focuses on the process of building a business model and ecosystem that will solve the problem of plastic pollution of our planet in the future. The initiative also focuses on tracking the amount of recycled plastic in this process. The platform connects businesses and individuals with plastic recovery ventures, enabling those project leaders to obtain the financing they need. The highlight of their recent joint presentation was the NFT sustainable collection, in partnership with the Lancaster Paris Hotel. During this event, NFT buyers could take advantage of free accommodation in the hotel. With Celo's support, Plastiks is currently on track to build a more sustainable public awareness of ecology, but also to achieve much greater transparency in the area of ​​plastics recycling.

- Esolidar uses the potential of blockchain technology to increase environmental, social and management efforts in the ecology sector (ESG). During its last presentation, the team behind Esolidar unveiled the NFT Sweepstake prototype, which featured a lot of competition opportunities for interested users to enter and win an exclusive NFT. The Esolidar team has made a commitment to build a common technical architecture with Celo to harness the potential of web3 to increase industry transparency, but also to engage in fundraising.

- A year ago, in September 2021, the Celo team announced a new partnership with the Mysten Labs project. This collaboration aims to improve the throughput of the Celo blockchain. The modernization of the network is to be realized with the help of the advanced mempool protocol, but also thanks to the use of the Narwhal and Tusk systems.

- In addition, Mysten Labs would also provide significant support for the Move virtual machine. This is a real milestone as it would facilitate the migration of frequently used Celo core contracts such as cUSD and cEUR.

- Thanks to the achievements of the Celo network, which are primarily focused on sustainable innovation, Toucan announced that soon it intends to launch its system on the Celo architecture.

- Toucan's mechanism of operation is that this project first tokenizes the actual carbon credits in the chain, and then creates carbon pools that are dedicated to the new use cases of the DeFi ecosystem. Toucan also enables pricing as it was previously a bottleneck in off-chain carbon markets.

- A new grant scheme is planned to be launched in the near future to enable the incubation and development of several Refi projects in the Celo ecosystem. Already at this stage, some of the projects that have committed to using the Toucan and Celo infrastructure can be identified. They are as follows: 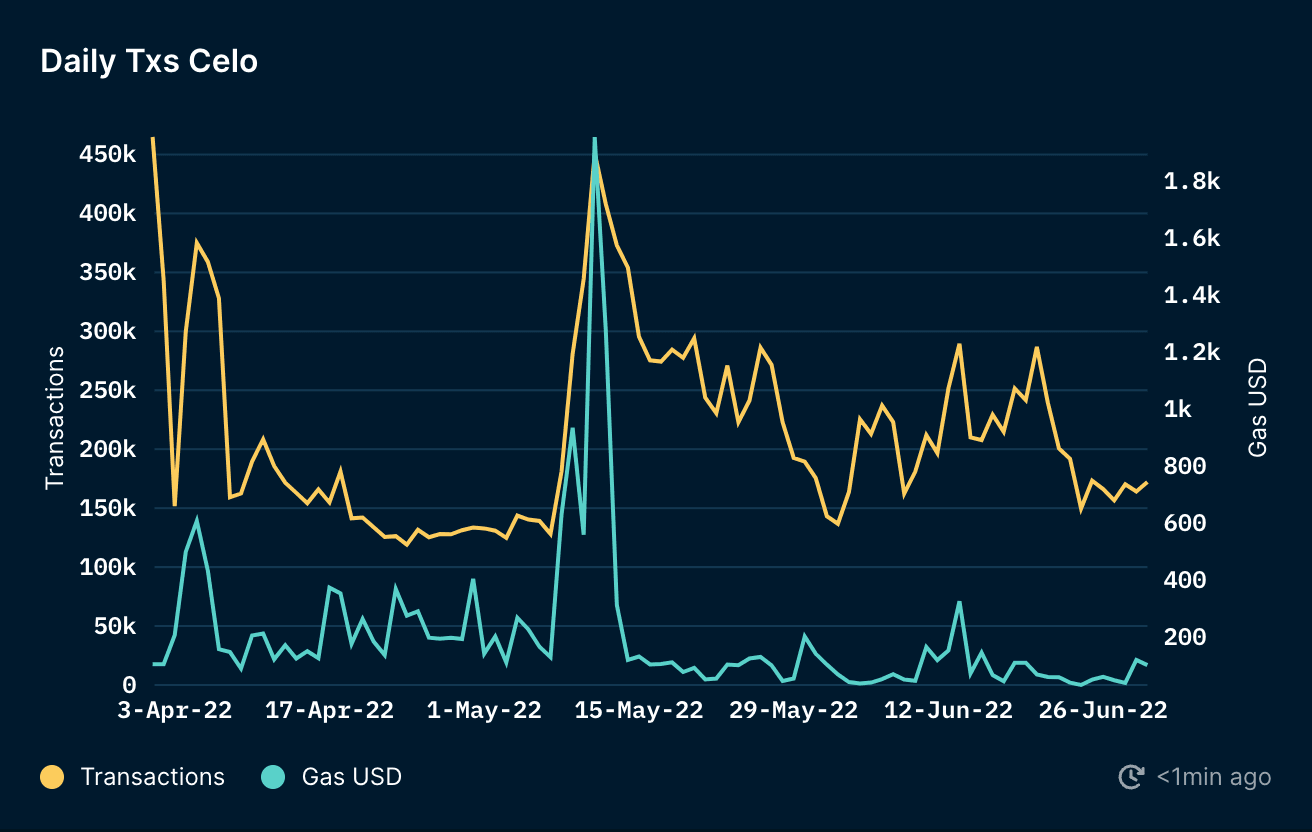 The volume of transactions in the Celo network was relatively volatile during the second quarter and oscillated between 120,000 to slightly over 450,000. The number of transactions and gas on the Celo blockchain increased on May 12 and, in the opinion of Tytanid experts, this event should be associated with UST depegging. The information presented above clearly illustrates that the Celo protocol was not sufficiently secured against external events on the broadly understood digital currency market. 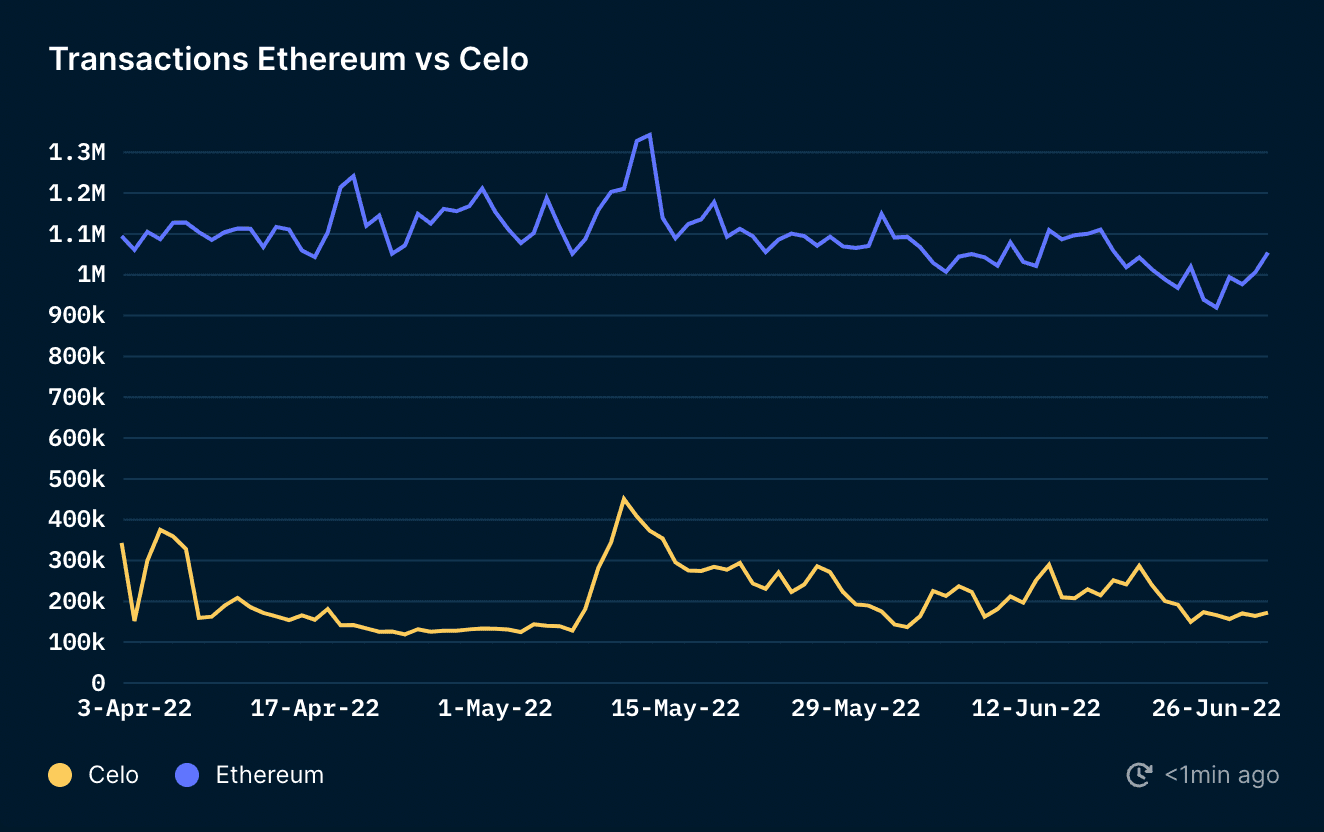 When comparing Celo transactions with their counterpart in the Ethereum network, the trends for both networks are similar. An interesting fact is that the number of transactions in the Celo network after the aforementioned de-peg event in UST seemed to increase in a higher trend than it was in the past. This is because the analysis of public data shows that the transaction volume has almost doubled to 450,000 transactions. This indicates increased activity in the Celo network, among new projects. 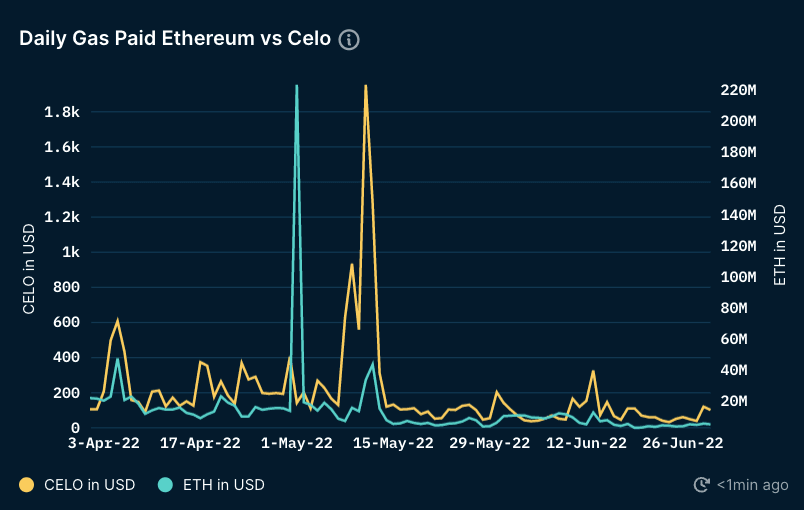 The data presented in the chart above show that in Q2 2022 Celo users paid much less gas compared to Ethereum. On average, the amount of gas paid on the Celo blockchain was less than $ 400 a day. The gas toll volume in this protocol peaked on May 11, 2022 and reached just over $ 1,900. 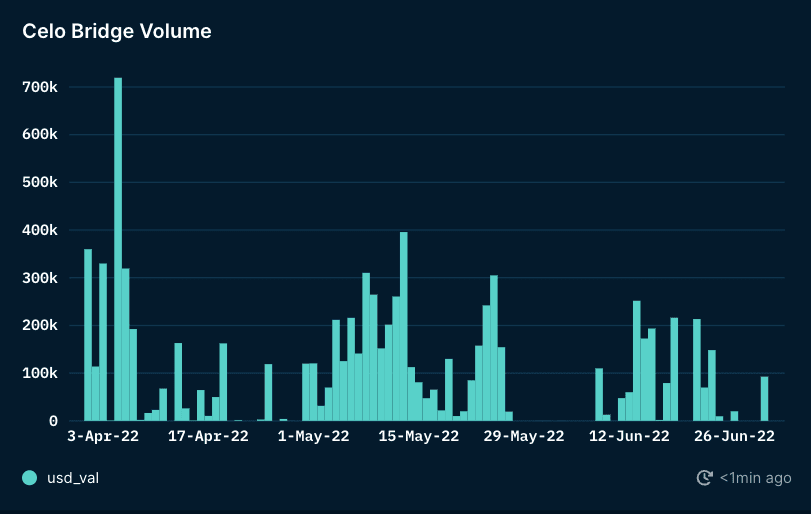 The chart above illustrates the bridging activity taking place from Ethereum to Celo. It is easy to see that the daily volume fluctuated during the quarter and peaked at the beginning of April when it hovered above USD 700,000. It is worth noting that the volume was relatively small over a period of time, especially from late May to more or less mid-June. According to Tytanid experts, the main factor that could lead to this is the general downward trend in the entire digital currency sector that took place after the high-profile bankruptcy of UST. 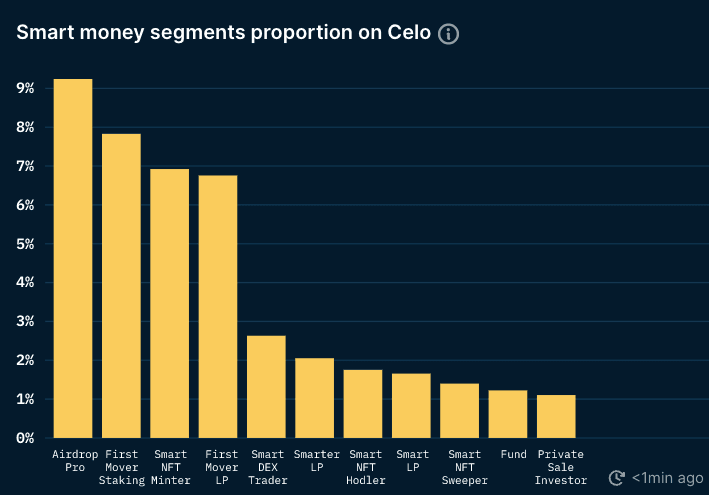 When comparing the overlap of individual Smart Money addresses on the Celo and Ethereum networks, it appeared that during Q2 2022 about 9% of Airdrop Pro addresses were also on Celo, followed by First Mover Staking and First Mover LP. Relating these figures to the first quarter data, there are indications that Celo has started to attract the attention of more Smart Money addresses, which seems obvious primarily due to the ever-increasing number of blockchain projects focusing on sustainability.

In our opinion, the decision to develop the Celo project towards ReFi, but also sustainable development, was a bull's eye and significantly contributed to the significant development of the entire project during the second quarter. The smart decisions of the Celo protocol management team also led to the development of an international community and support from numerous partners as well as decentralized applications. The published roadmap shows that in the coming quarters, the Celo protocol will make available a wide range of improvements and innovations, thus paving the way for a fast and accessible blockchain, which is additionally friendly both to the environment and the planet.