This report provides an overview of the Arbitrum ecosystem and the effectiveness of Layer 2 technology.

Arbitrum is an optimistic rollup and is one of the many tools designed to scale the Ethereum blockchain. The fundamental premise of this technology is that validators are non-malicious and transactions are posted correctly. To ensure that all data is valid, each participant is able to deny the validity of the claim for approximately one week. If any claims are contested then the dispute is narrowed down to just a single line of instruction and then executed on the L1 chain for validation. The architecture of this system is based on the fact that the fake node is removed and a part of it goes to the winner of the challenge. The mechanism for presenting evidence of abnormal state transition has been identified as evidence of fraud. The scheme of action described above is the foundation of how the optimistic aggregate package, which in fact is Arbitrum, works. The main purpose of this Ethereum scaling solution is to reduce the load on the primary L1 chain. This is possible because, as a consequence of this state of affairs, not all transactions need to be redone, encouraging nodes to behave honestly. 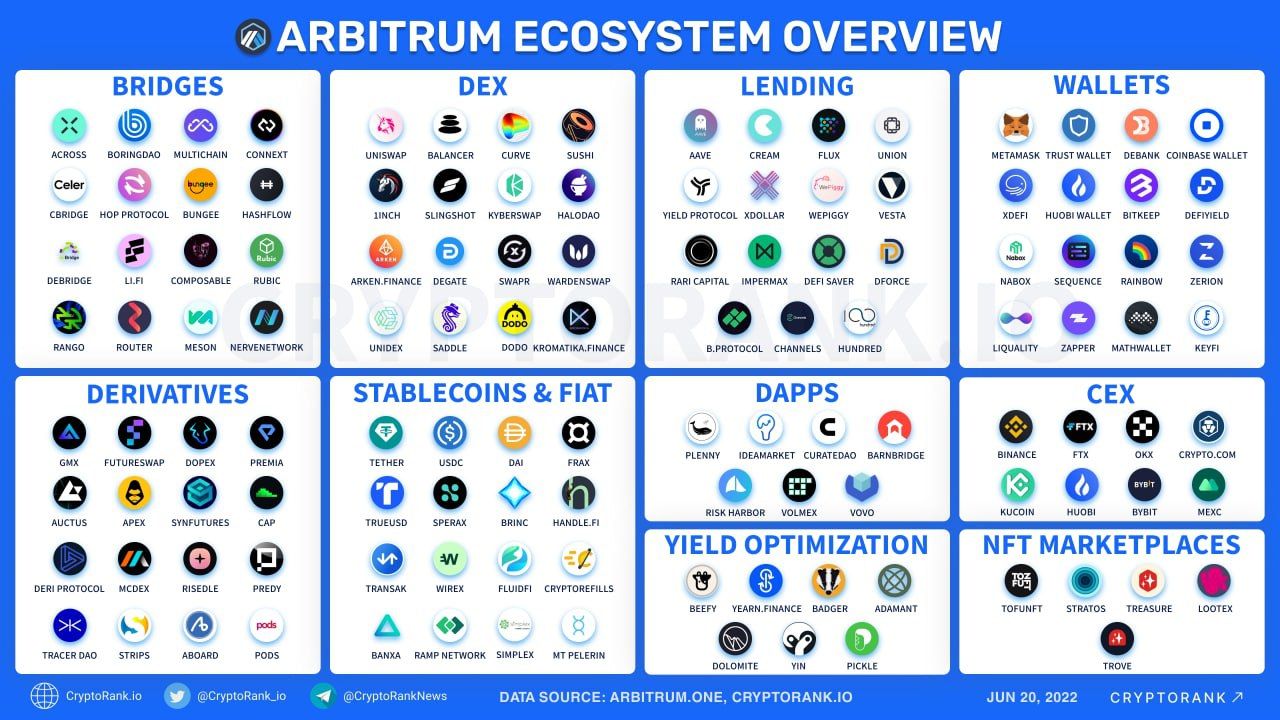 Arbitrum is a widely used base for the dynamic dApps ecosystem as well as for the tools that have been published in the Arbitrum One Portal catalog.

With the launch of another milestone known as Arbitrum Nitro, which has already been announced, developers will be able to expect a more seamless use of Geth instead of the specially developed Arbitrum Virtual Machine (AVM) language. The Arbitrum team hopes that the bandwidth in the chain will increase significantly along with the reduction of transaction fees, which in turn will allow more teams to efficiently and successively expand the current Arbitrum ecosystem.

Strategic implementation of the roadmap: Q2 2022

- The American company Offchain Labs released a report on the Arbitrum One update on July 16, 2022. The above-mentioned report to the Nitro technology stack focused on the latest Arbitrum triumph and came directly after the successful migration of Rinkeby's test network in the coming month.

- The Nitro Arbitrum includes a number of significant improvements to the current AVM and ArbOS structure.

- Custom EVM emulators would also be replaced by Geth, one of the most popular Ethereum node startup software clients.

- Finally, ArbOS would be scaled down and rewritten in Go, which would result in a more optimized compression system for transactions.

- With these improvements in Nitro, the Arbitrum team is expecting a 7x improvement in throughput, as well as significantly lower fees.

- Arbitrum Odyssey has been announced as a collaboration with Project Galaxy, the web3 credentials network

- This is an interactive exploration of the Arbitrum ecosystem where users would perform several tasks in a chain and navigate through various dApp applications in the Arbitrum chain structure to earn unique NFTs.

- This initiative was to run for nine weeks, culminating in the Arbi NFT Final; however, the Odyssey Arbitrum has been paused and is waiting for the Nitro update to go live on the main network.

- AnyTrust is based on the minimum trust principle provided by the Data Accessibility Committee. This body would be responsible for managing the transaction data off-chain and for delivering the same data within the batch.

- Signing Data Availability Certificates (DACerts) for a batch of transactions and posting this DACert instead of all transactions leads to less L1 chain storage requirements and lower transaction fees.

- DACert would also make a clear declaration that the Committee is responsible for providing batch data of transactions upon request.

- If the Committee cannot reach consensus, the chain will revert to the Arbitrum Summary Protocol.

- Data execution will be performed in the L2 chain, and then the new rollup states will be confirmed in Ethereum.

- Similar to Arbitrum One which is built on the Arbitrum Rollup technology, Arbitrum Nova is a new chain built on the foundation of AnyTrust technology and will be introduced with Nitro. It is fully compatible with EVM and the development in each chain will be as smooth as possible.

The number of transactions in the Arbitrum network varied between 40,000 and 100,000 transactions per day. It is worth adding that a sharp upward trend was clearly visible, the peak of which took place in the period from June 26 to June 28. Gas prices in the Arbitrum protocol were similar. During the UST de-pegging event on May 12, gas prices soared, while daily transaction volumes plunged. A different situation occurred in the case of the second daily jump in gas prices on June 28, when a proportional daily increase in the number of transactions could be observed. In the opinion of Tytanid experts, the reason for this situation should be seen in the Arbitrum Odyssey update, which was suspended at the end of the second quarter of 2022 by the team controlling this project. At that time, the Arbitrum developers wanted to integrate the Nitro update.

The number of daily trades compared to Ethereum 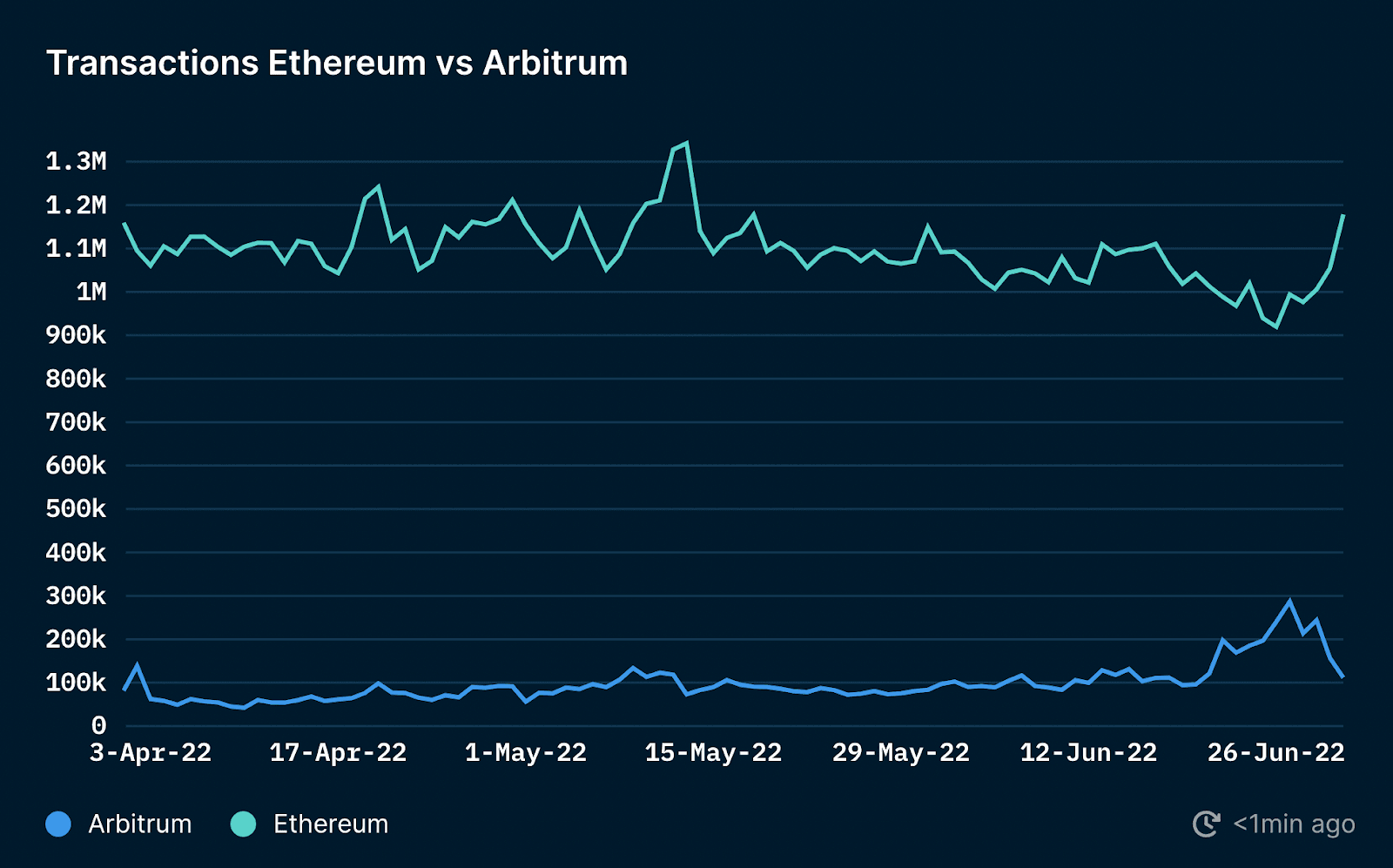 Comparing the number of transactions to Ethereum, the volume of ETH transactions was higher, but a side trend was noticeable for both networks, which oscillated between 100,000 - 200,000 for Arbitrum and 1 million - 1.2 million for Ethereum. An interesting fact is that between June 19 and June 28, the total number of transactions on the ETH network decreased in light of the increase in transactions on Arbitrum, which was the same period as the Arbitrum Odyssey suffered from obstacles. For obvious reasons, this leads to the conclusion that the eyes of experts should carefully watch the data related to the daily transaction volume on this second layer network when Arbitrum Odyssey is released after the Nitro update.

By analyzing the data on all addresses that have been marked as Smart Money in the Ethereum blockchain, we have prepared a graph that precisely illustrates the percentage of similar addresses in the Arbitrum network. The study below clearly shows that Airdrop Pro had by far the largest percentage of overlapping addresses, leading to the conclusion that many of the entities that control wallets are likely to be waiting for Arbitrum. In our opinion, users do this to follow in the footsteps of another solution designed to scale Ethereum. Specifically, it's about Optimism, a second layer project that created its native token in early 2022.

Top Entities by Users and Transactions 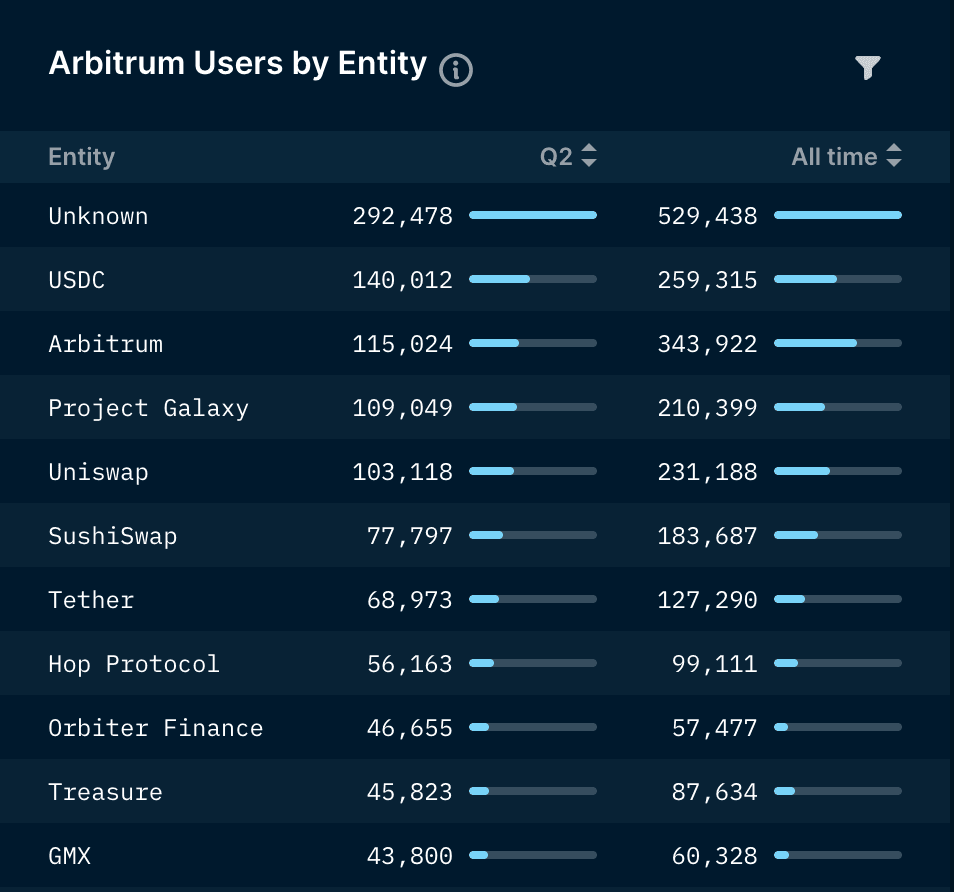 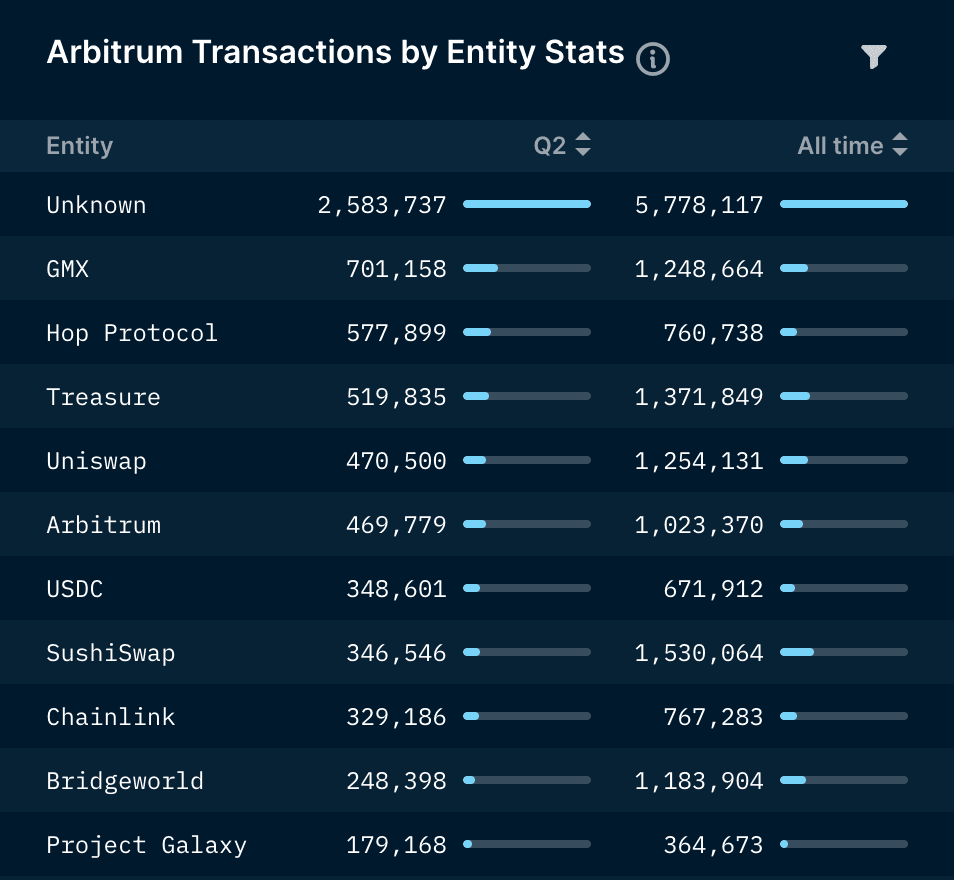 At this point, it should be noted that 2L solutions do not rely on themselves in terms of the development of their own system infrastructure. As the second layer technology adapts, more and more new companies are making efforts to develop products to support projects such as Arbitrum. In addition to swaps and bridges, GMX and Treasure deserve a distinction in this respect, as they proved to be interesting initiatives that significantly supported the increase in the number of transactions on Arbitrum.

Projects that deserve recognition in the second quarter of 2022

- GMX is a kind of decentralized spot and perpetual exchange that offers extremely low swap and transaction fees to its users without affecting prices. All trading is handled by a multi-asset pool that charges fees from market-making, leverage trading, but also swap fees. Data on the prices of individual assets are taken directly from the Chainlink oracle, as well as in the form of aggregated prices from major exchanges.

-By hooking up to the Arbitrum Odyssey protocol, as well as strong incentives targeting both players and liquidity providers, GMX has recently seen a significant increase in transaction volume as well as user and cryptocurrency expert attention.

- Additionally, after implementing the connection on networks such as Avalanche and Arbitrum, GMX currently has an open option to reach out to wide communities and take advantage of the low fees on both networks.

- Treasure is a novel decentralized NFT ecosystem based on the Arbitrum protocol that focuses on metaverse projects. Each indexed project uses MAGIC, which is a common internal sign in the Treasure system.

- The latest achievement by the developers behind this venture is Trove. It is an innovative NFT market built around the Treasure ecosystem, which strengthens the well-established position of this project. It's worth adding here that Trove has recently officially released an alpha version that covers a wider range of NFTs, from art to photography and music.

Despite the downward trend that is taking place in the entire cryptocurrency market, the managers of the Arbitrum project took up the challenge and successfully contacted users by introducing Arbitrum Odyssey. This allowed the community around this Ethereum scaling solution to explore its dynamic ecosystem, rewarding them additionally as part of the process. With the upcoming improvements to the Nitro and Nova architecture, Arbitrum is likely to significantly increase bandwidth and lower the cost of fees, and could soon become a leader in 2L projects.